By Pink Banana Media - February 05, 2009
New Webinar Series for 2009
Updated presentation adds more detail on “touch points” and the power of influential contacts in your network

Be sure to watch for our freshly updated seminar and webinar series for 2009, covering the world of Social Network and Web 2.0 marketing to the GLBT?community. With almost 50% new material, focusing on new topics such as Power Influencers and how to connect with them, as well as expanding on the best Touch Points your company can have when making outreach in this new frontiers, this seminar/webinar series will show you both how to do it all in-house, as well as help bring some new concepts to your overall online marketing mix.... 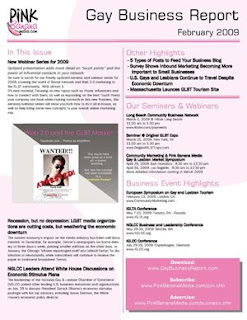 Recession, but no depression: LGBT media organizations are cutting costs, but weathering the economic downturn

The current economy’s impact on the media industry has been well documented. In December, for example, Detroit’s newspapers cut home delivery to three days a week, printing smaller editions on the other days. In January, the Chicago Tribune repackaged itself into tabloid format for distribution at newsstands, while subscribers will continue to receive the paper in traditional broadsheet format....