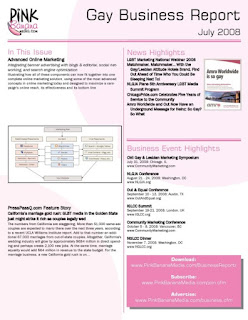 Advanced Online Marketing
Integrating banner advertising with blogs & editorial, social networking, and search engine optimization
Illustrating how all of these components can now fit together into one complete online marketing solution, using some of the most advanced concepts in online marketing today and designed to maximize a campaign's online reach, its effectiveness and its bottom line....

PressPassQ.com Feature Story
California’s marriage gold rush: GLBT media in the Golden State just might strike it rich as couples legally wed
The numbers from California are staggering. More than 51,000 same-sex couples are expected to marry there over the next three years, according to a recent UCLA Williams Institute report. Add to that number an additional 67,000 marriages from out-of-state couples. Altogether, California's wedding industry will grow by approximately $684 million in direct spending and perhaps create 2,100 new jobs. At the same time, marriage equality would add $64 million in revenue to the state budget. For the marriage business, a new California gold rush is on....