We're going to go out on a limb here, stick our necks out, and make a strong statement - we believe the "TwitterSphere" is at a unique place in history, sitting on the edge of its tipping point.  We believe it's sitting at that very same inflection point the Internet was back in the late 90's, when most people were accessing it via AOL, Netscape was the dominant browser, and a comment we heard time and time again was "the Internet is simply the CB radio of our time... it too shall pass".

Fast forward to today, and with everything that's taken place since then, including the dot com bust and the subsequent growth of strong Internet-based businesses from all facets of life and industry, it's easy to see that doubting the direction and growth of the Internet was misguided at best.  With social media where it's at today, over a billion people have access to and can post to their heart's content on Facebook.  And everyone is, making this a very busy online community that is heavily filtered by Facebook to show us just those posts that it thinks we want to see... as a business, your message gets lost in that shuffle, unless you take advantage of their powerful Audience Builder to hone in and develop an audience profile you can hyper-target and advertise your business to.
Check out Pink Banana Media's Entry Level Facebook & Twitter Targeting opportunities.

Twitter may go down in history as one of the most misunderstood online platforms of our time... many people and businesses don't quite understand it, along with its power of infinite scalabililty.  They don't realize that there is a unique language inherent to Twitter which allows them to reach their audience in ways previously unheard of... in today's world, when Meryl Streep tweets, our President can hear her amongst the millions of Tweets posted online by the hour.  Now that's power!  And it's scalable, with no practical limit to how many you or your business can be connected to, and how many can engage with what you post in the form of likes, comments, clicks and shares.

But this doesn't happen automatically... it's success for you and your business is a function of what you post, how you post it, and how you engage with your Twitter audience.

Their algorithm is powerful, allowing users to see what is most relevant to them among the millions of Tweets posted each day. Based upon your network connections and how engaging your Tweets are determines whether your posts get seen or not... the more people engage with your Tweet, and the stronger your network, the better you and your business performs!

First, we'll show you WHY you want to be here, utilizing Twitter to its full potential for you personally or for your business.  It's all in the reach.  We've been in the LGBT online digital world for 22 years now, and we can tell you that without a doubt, the quality numbers of people and the high engagement rate of online Twitter communities rivals anything that was achievable with online website communities of the past 20+ years.

First, it's all about scale.  On a personal level, Facebook limits you to 5,000 connections (friends) and Instagram allows you to follow a maximum of 7,500 people. A Facebook business page allows for millions of followers, and yet their algorithm is set to that your message probably won't be seen by these followers, unless you pay for hyper-targeted Facebook advertising. Twitter's main limitation, initially, is that it doesn't allow you to follow any more people once you're following 5,000, unless over 5,000 are following you back.  This is brilliant on their part... it forces users to be more engaged with their Twitter community in order to truly succeed in this environment.  Gone are the days where you could "mass follow" people on MySpace and have them follow you back, with no relationship nor engagement with those followers whatsoever.

The following examples tell a more complete story and should convince you of both the strength and the infinite scalability of the LGBT TwitterSphere, bringing your message to a wide, engaged audience like never before.

Simply take a look at the numbers and screen shots below to get a sense of how successful these LGBT organizations have recently been on Twitter.

Lesbians Who Tech - they recently had their most successful San Francisco summit yet, with over a thousand lesbians in attendance over a period of 3 days.  The report below shows the activity for the hashtag #LWTSummit over a period of 22 hours.  Extrapolated out for the full 3 days, they received approximately 1.5M impressions on Twitter, which means that a Tweet about Lesbians Who Tech was available in a user's Twitter feed 1.5M times over those 3 days.  The reach over 22 hours of 292,694 shows how many individual accounts these Tweets appeared in.
www.LesbiansWhoTech.org
TweetReach Full Report 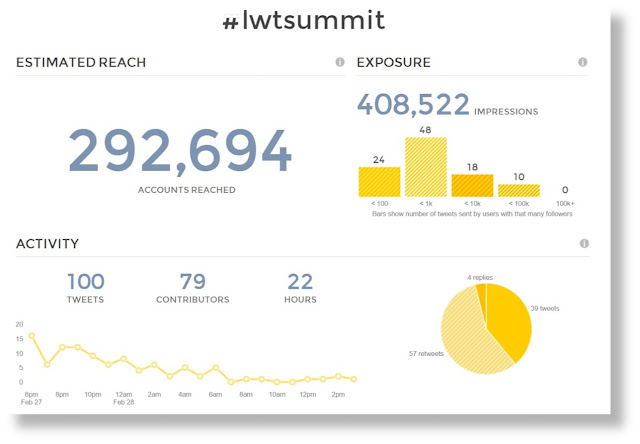 Clexacon -  now here's a lesbian event you may never have heard of!  They just wrapped up their convention in Las Vegas, with thousands of lesbians in attendance over a period of 3 days.  The report below shows the activity for the hashtag #Clexacon over a period of 41 minutes (larger reports measuring more than 1,500 Tweets cost a lot more money to produce).  Extrapolated out for the full 3 days, they received approximately 74M impressions on Twitter.  The reach over those 41 minutes was an incredible 451,607 individuals!
www.ClexaCon.com
TweetReach Full Report 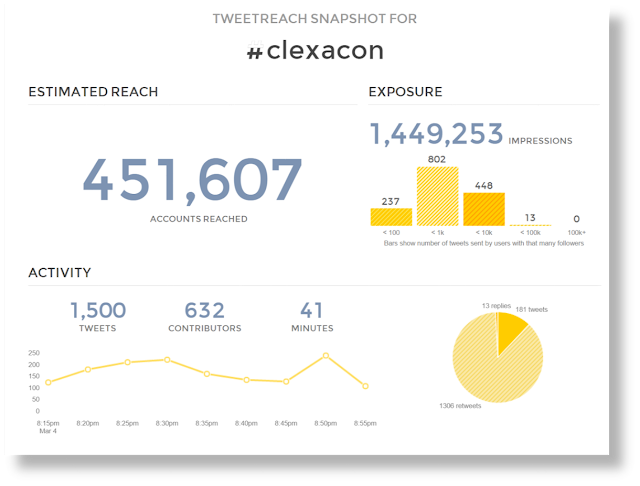 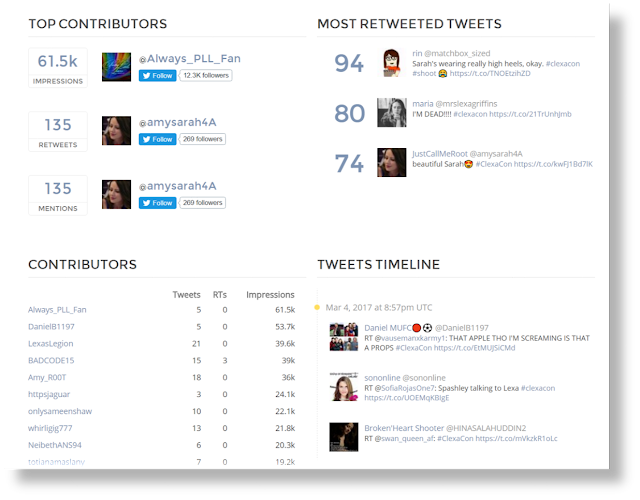 LGBT History Month (UK) -  Unlike the LGBT History Month in the US in October, the UK celebrates this event nationwide, with nearly every LGBT and LGBT-friendly company and organization participating.  They also just wrapped up this event, which coverered 28 days in February 2017.  The report below shows the activity for the hashtag #LGBTHM17 over a period of 3 days.  Extrapolated out for the full 28 days, they received approximately 225M impressions on Twitter.  The reach over just those 3 days was 8,087,502 individuals!
www.lgbthistory.org.uk
www.lgbthistorymonth.org.uk
@lgbthm
TweetReach Full Report 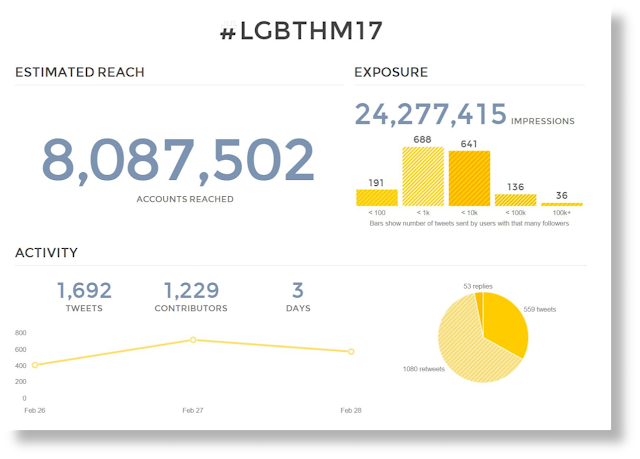 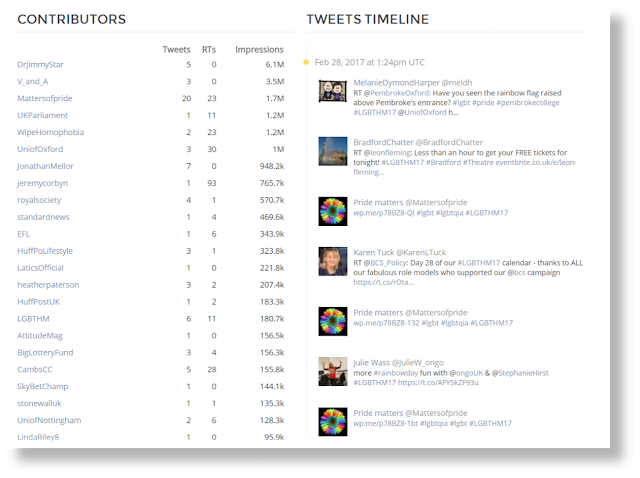 The real question is does all of this REACH and EXPOSURE actually mean anything?  The answer is YES... take a look at our next in this series of blog posts entitled HOW Do You Do It?  The LGBT "TwitterSphere" and the Unique Language of Twitter - you'll see that some of these Twitter posts actually turn into Breakout Tweets, easily receiving 5,000 - 10,000 impressions with 10% engagement (that's 500 - 1,000 likes, comments, clicks and shares for a single Tweet!).

The conclusion is hard to refute… these events are incredibly way ahead of anything else we’ve seen in the LGBT world using any online or digital media over the past 20+ years.  And this phenomenon is just getting started... we believe that within 5 years, this medium, the LGBT TwitterSphere, will become the dominant form of LGBT media, rivaling that of websites, search and rival social media such as Facebook.  But, as we all know, this is an ever-evolving environment... lots of things can develop within this period of time that just haven't been invented yet!

Read more on this topic with the following articles:

Anonymous said…
How to Deposit with betway » Free bet in India » No deposit bonus
Betway Free Bet — Betway allows you to place bets matchpoint at an 카지노 online casino or sportsbook without having to deposit a single deposit. The betway betway free
January 24, 2022 at 6:41 PM