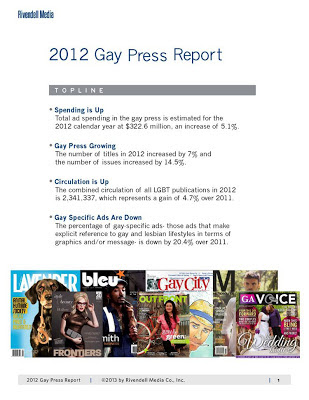 Just in time for Gay Pride, Rivendell Media has released the annual Gay Press Report revealing that spending in the Gay Press for 2012 is at $322.6 million, up 5.1% from 2011 and showing The Gay Press has fully recovered from the Great Recession.

Spending and circulation in the Gay Press is up for 2012- bucking the mainstream press. Actual spending is up just over 5% from 2011 to $322.6 Million.   Circulation of LGBT media is also up almost 5%.

“The Gay Press is fully recovered from the recession,” says Todd Evans, President and CEO of Rivendell Media.  The Gay Press, once thought to be recession proof, was dramatically effected by the 2009 recession and spending (which had been always trending up- sometimes dramatically) showed wide swings from its all time high in 2009 to almost a 50% spending loss in 2010 back to another wide swing up in 2011 and is again approaching its all time high.

Rivendell Media, the leading media representation firm for most LGBT publications in the US, reports that spending for 2013 should reach a new high based on strong first and second quarter sales.

Additionally, a recent informal survey of the leading LGBT publishers in the gay press (conducted last Friday, May 31, 2013 in anticipation of this release) confirms that 85% are optimistic for a good year ahead.   "This report shows the LGBT press outperforming general magazine spending growth in 2012," said Tracy Baim, publisher of Windy City Times. "In this ever-changing media landscape, it is important for companies to focus their money in targeted ways, and the LGBT community provides a better value for their spending dollars than almost any media company. LGBTs are trend leaders, and their regional media outlets provide an excellent opportunity to reach a valued and valuable community. These media companies have a long history as legacy media outlets in their cities, and the level of their connection to their communities is not able to be duplicated through any other advertising channels.”

“2012 was mostly good news for the Gay Press” says Todd Evans.  “Still, not all was rosy.  Gay-specific creative in advertising campaigns was way down from its all time high, which could still be a holdover from the recession as creative is generally a bigger investment in funds and time.”

The Gay Press Report has been produced annually since 1994 to provide a unique, historical perspective on the gay and lesbian market.  To view the 2012 report in its entirety, please visit:

Among the other findings in the 2012 Gay Press Report:

Blogger said…
Need To Boost Your ClickBank Traffic And Commissions?