IGLCC Conference and OutGames 2009 in Copenhagen 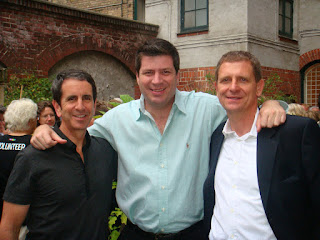 I write this as I sit in the airport's SAS lounge, one of the finest lounges I think I've ever seen, on my way home from a whirlwind trip to Copenhagen to attend the IGLCC Conference here, held in conjunction with the Human Right Conference being held by the World OutGames 2009 here in this city.
A word needs to be said about Copenhagen... it's a wonderful city and I wish I could have spent more time here. Staying in a hotel in the old city center area, I felt the entire city was at my fingertips for exploring, with some of the coolest and hippest restaurants spread throughout within small, medieval streets and open, picturesque canals.
Despite some negative press related to the OutGames in terms of two hate-crimes being committed, the overall feeling here is definitely one of acceptance and tolerance, along with a slightly edgy feel when one stays out past midnight meeting some of the locals at the gay bars spread throughout the old part of the city. And can these Danes party! At 4 am, they are still going strong, and during the warmer summer months when the sun can rise before 4 am, it can be quite a scene as one leaves a club in the wee hours of the early morning with full sun and crazy revelers roaming the streets.
On the business side of life, the conference overall was a success. It was a bit tough at times, in that our business group was mixed with a wide variety of conference attendees who had come for the various educational/workshop tracks including a variety of GLBT human rights topics. But we all decided to make the best of it, and this mix allowed us to meet folks we normally wouldn't have met under a purely business setting.
The week began with an opening reception at City Hall, where everyone had a chance to reconnect after not seeing each other for perhaps over a year or so. The reception was also mixed, so we mingled among some new faces from the very beginning. After connecting, a few of us headed out to the local nightlife, which seemed to be primarily focused on Oscar's, a trendy gay corner bar that had hundreds of guys spilling out on the street outside of the bar every night of the week. Oscar's became the de facto meeting point for everyone to start in their after-hours revelry, and night after night we ran into old faces, along with a few new.
On Tuesday, many of us attended the IGLTA Reception held at the Hotel 27, a really cool hotel just one block from Oscar's in the center of the old city. By the time Wednesday came around, we were all enjoying the final night's reception hosted by the CGLCC (Copenhagen Gay & Lesbian Chamber of Commerce - www.copenhagen-gay-life.dk) and IGLCC (www.iglcc.org) at Goldsmith Mads Heindorf (www.madsheindorf.dk).
The conference workshops, by the way, were quite varied... I moderated a marketing panel with Ian Johnson of Out Now Consulting (outnowconsulting.com), Tom Roth of Community Marketing (www.communitymarketinginc.com) and Andreas Citak of IBM, which went quite well. I also attended a workshop held right after ours, focused on some of the new social features being developed into the ILGA website (www.ilga.org), which sounded very exciting.
So overall it made for a great but short trip to Copenhagen. It seems from here everyone is either on their way to Stockholm for Stockholm Pride this upcoming weekend, or Amsterdam for their over-the-top Gay Pride festival coming up this same weekend. I wish I could go, but alas eventually we all have to return home at some point!
Below are some links to photos from this trip. Enjoy!
Matt
Additional Links:
http://www.visitcopenhagen.com/content/tourist/gay_copenhagen
http://www.flysas.com/gay
Photo Links:
http://www.flickr.com/photos/mattskal/sets/72157621766180911/
http://www.flickr.com/photos/mattskal/sets/72157621880603696/
cglcc gay copenhagen iglcc outgames