By Pink Banana Media - June 23, 2008
In terms of gay friendly U.S. cities San Francisco is most likely to rank at the top of anyone’s list. The city, however, is more than just an ally to the gay community, rather, its politics and culture have been drastically shaped by a long history of GLBT community involvement. With nearly 500,000 in attendance at last year’s Pride Parade and an average local age of 31, San Francisco’s gay and lesbian community is large, predominantly young, and very political, establishing the city as a virtual “Gay Mecca.” 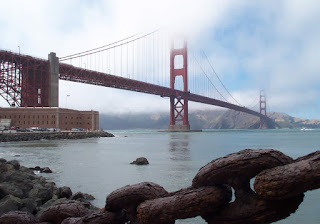 Though the entire city is considered a home to the gay community, the heart of GLBT life and history really begins in the Castro. Having been first settled by gay men back in the 1970’s, this 14-square-block area, named for its location along the famed Castro St. thoroughfare, has come to be seen as a symbol of gay American culture. Numerous annual events take place there and a variety of gay historical landmarks attract visitors from all around the world. The Castro Street Fair, now in its 32nd year, takes place in September and is one of the community’s largest annual events. Outdoor dancing, live performances, arts and crafts, food and beverages, and a variety of Bay Area vendors are a few of the fair’s highlights. Another important September event is the Folsom Street Fair. An unparalleled event catering specifically to the leather and bear communities, the Folsom Street Fair has been raising community awareness and funding for charities for over 22 years. It has an attendance of 300,000 yearly and is known as the premiere leather event in the US. In addition, the Dore Ally Street Fair, considered smaller sibling to the Folsom Street Fair and produced by the same volunteer nonprofit corporation, SMMILE, has become an increasingly popular event among leather enthusiasts. It is located in the South of Market (SoMa) district off of Folsom St. between 9th and 10th, and occurs every year in the last weekend of July. A relatively recent event to hit San Francisco, also in September, is the Love Parade. Having originated and been hugely popular in Berlin, Germany, this US version of the street parade is a youthful and eclectic mix of GLBT and heterosexual dance music/rave scene enthusiasts. Moreover, while it has only been in the US for two years, attendance and awareness, as well as the number of major sponsors, have been increasing.

Hands down, however, the largest gay event in the city, and one of the largest in the world for that matter, is San Francisco Pride. Bringing together over half a million gays and lesbians, Pride lasts the entire month of June, while the main attractions, the parade and festival, take place typically in the last weekend of the month. What’s more is that outside of being a charitable event which raises over $130,000 for GLBT causes, Pride is also a significant economic resource for city tourism. In just visiting the San Francisco Convention and Visitor’s Bureau website, it is evident that gay tourism and travel are crucial to the city’s businesses and economic life. As the only niche targeted group on the site, the gay community is considered a key consumer of city resources.

Also an important player in the economic life of San Francisco is the Golden Gate Business Association (GGBA). The GGBA began as the nation's first business organization founded by gay and lesbian entrepreneurs and for over thirty years has built a community of excellent LGBT businesses with significant value for the economy. Aside from providing members with networking and mentoring opportunities, informal business advice, and business leads and referrals, the GGBA has also had an influential voice in both the Office of the Mayor and the members of the Board of Supervisors. Additionally, the GGBA’s latest venture has been the launch of their new Tourism Advisory Program (TAP), a coordinated cooperative campaign designed to attract GLBT tourists to the city. Furthermore, some other notable business groups operating in or close to the San Francisco region include the Bay Area Community of Women (BACW), the Russian River Chamber of Commerce, and the Rainbow Chamber of Commerce in San Jose.

In terms of print, San Francisco has five strong GLBT publications. The Bay Area Reporter is the city’s oldest and largest local newspaper of record serving the GLBT communities. It began in 1971 and is published every Thursday by Benro Enterprises, Inc. and is distributed in San Francisco and surrounding cities of the Bay Area, as well as 20 other US cities. The East Bay Voice and the San Francisco Bay Times are two other popular local papers geared specifically towards gay and lesbian news and entertainment. The San Francisco Bay Guardian, though not a gay paper, is an independent and locally owned news and entertainment source with a heavy slant towards alternative and gay lifestyles. For something more light and focused on the local nightlife or bar scene, Gloss Magazine is an excellent resource. It is printed every other Friday, 26 times a year, and is delivered to bars, restaurants, nightclubs, hotels, bookstores, health clubs, coffee houses, retail outlets, and youth centers in over 250 different locations including San Francisco, San Jose, the East Bay, Sacramento, the Russian River, and West Hollywood. Also, though operating out of San Jose, Out Now magazine is a popular gay community guide to entertainment. Finally, it should also be noted that a few other important national media companies and publications, such as PlanetOut Partners and Curve Magazine, are all operated out of San Francisco.

As for San Francisco’s nightlife and gay social scene there are a number of different hot spots. Of course many of the staples can be found on the Castro, off either Castro or Market St., such as Badlands, Midnight Sun, Harvey’s, The Cafe, and The Bar. Others, such as Martini’s, a piano bar, Metro, with its more casual atmosphere, and Mecca, an upscale trendy lounge, can also be found in the area. Off of Folsom St. and the area surrounding are a mix of some of San Francisco’s most famous bear and leather bars as well as popular dance clubs and college bars. Between 7th and 10th on Folsom or Bryant St. is where most of the bear/leather bars can be found, such as Powerhouse. Other Folsom bars though include the Eagle Tavern, whose clientele are part bear, part edgy queer punks, The Stud, where all the college kids come to dance, and the End Up, whose name implies it all as this dance spot opens Friday and doesn’t close its doors till Monday morning!

On the other side of town, however, near Polk Street, is one of the other founding gay regions of the city. Here, many of the hotels catering to the gay and lesbian community can be found, as there are mostly small B&Bs in the Castro area such as the 24 Henry Guest House and the Parker House. In San Francisco overall, there are several larger hotels catering strongly to the gay & lesbian community, including the Renoir Hotel, the Handlery Union Square Hotel, Pan Pacific Hotel, Cartwright Hotel on Union Square and the entire chain of Kimpton Hotels and Joie de Vivre Hotels, based in San Francisco.

Again, since San Francisco has such a large and diverse gay population, it is impossible to examine all or most of the ways in which the gay community interacts with its local businesses and organizations, however, there are a few more important aspects to note. First of all, San Francisco’s art scene has always been something which separates it from most other cities. The National Queer Arts Festival in June is a month long celebration of the community’s contribution to the arts and American culture. Another event, The San Francisco International LGBT Film Festival, presented by Frameline, is a huge production now in its 30th year. Even still, there is a strong local theater culture where companies such as SteinBeck Presents perform shows that directly express the lives and art of the gay community. Finally, the San Francisco LGBT Community Center has been a newer yet welcomed addition to the gay community using its resources to help bring together the community and aid those in need. In all, San Francisco is a city with a strong gay history and tradition whose unique blend of urban gay men and women both appreciate and respect their roots while continually staying at the forefront of an ever evolving culture.

For the full-color PDF version of this story, go here:
http://www.PinkBananaMedia.com/pdf/gmg2008-SanFrancisco.pdf