By Pink Banana Media - April 24, 2008
Everything is Bigger in Texas! At least that's how the saying goes, and in Dallas' gay & lesbian community, they couldn't be more right. The city has the largest gay population in the state of Texas with approximately 120,000 GLBT residents. Dallas also boasts the largest gay & lesbian church in the world, the Cathedral of Hope, with over 30,000 national members. 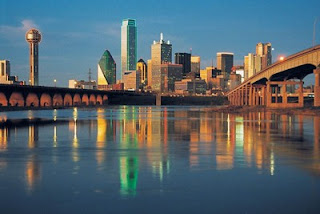 As a work and business center, Dallas consistently ranks as one of the top labor markets in the US, with one of the youngest and most diverse populations in the country. Nineteen Fortune 500 companies are headquartered here in Dallas, and the Dallas / Ft. Worth airport is the 3rd busiest in the world. In addition, Dallas is technologically savvy, ranked as the 2nd most wired region in the US.

On the financial side, Dallas has no personal income tax and a low cost of living, leaving more "discretionary" income for personal enjoyment and travel.

Popular bars and clubs include the Round-Up Saloon for those looking for a country-western flair, and S-4 for late night dancing and entertainment on multiple floors, Woody's, JR's and Mickey's for that neighborhood bar environment, Kaliente and Escandalo for the latin crowd, and Buddies II and Sue Ellen's for the ladies.

In the print media, Dallas has several major publications, the Dallas Voice, a local 20-year old fixture in the gay & lesbian community and GAB Magazine, covering news and entertainment all across Texas. The Dallas Voice has a readership of over 44,000 every Friday, and is distributed all throughout Dallas as well as over 80 7-Elevens throughout the city. They also publish the Dallas Voice Yellow Pages, a local gay & lesbian business directory and one of the oldest in the state of Texas. Some of the key individuals at the Dallas Voice and the TXT News Magazine include Robert Moore (Publisher), Leo Cusimano (Advertising Director), Kris Martin (Promotions Manager) and Daniel Kusner (Lifestyles Editor).

In business, Dallas has the North Texas GLBT Chamber of Commerce with more than 250 business and corporate members including American Airlines, Best Buy, Texas Instruments, and Brinker International. Along with its publication partner, the Dallas Convention & Visitors Bureau, the Chamber publishes the Community Resource & Visitor Guide. The Chamber also produces networking events and educational programs. Its website www.glbtchamber.org provides a searchable directory of Chamber members, a community calendar and the area’s only GLBT focused job posting/employment program. The Chamber’s programs and operations are managed by its president, Tony Vedda. Its board of directors is made up of business people from a variety of business types and sizes; Sherry Briggs, a small business owner, currently serves as the Chairman of the Board, Derrick Brown, executive director of a nonprofit organization, is the Chairman-Elect. The Chamber serves as the business hub of Dallas and North Texas for the GLBT community.

Unique to Dallas is the Dallas Tavern Guild, a gay business organization bringing the various gay bars and clubs of Dallas together for fundraising and events. Founded in 1984 as resource for organizing the nightclub businesses in Dallas, the Dallas Tavern Guild is one of the key gay business leaders of Dallas. Michael Doughman, the current Executive Director of the organization, has a long and storied history with gay Dallas goes back to the early years when gay business life and fundraising here in this city was just starting. The Alan Ross Texas Freedom Parade is one of the most notable events produced by the Dallas Tavern Guild and named for its founder. Each year, 20-25,000 people gather to celebrate this September Pride Event that culminates with a Rally in historic Lee Park.

The Parade is part of a weekend celebration in mid September that includes Gay Day at Six Flags, a community sponsored event spearheaded by the Dallas Voice. Each year more and more regional GLBT members and families attend this festive celebration held the day before the parade and rally at the popular Arlington theme park. Also, the day before the parade as an early-morning offering there is the Pride Run, a 5k run through the streets of Oak Lawn, coordinated by The Front Runners, a locally gay and lesbian running club.

It should be pointed out that this event is often held at the Hilton Anatole Hotel, one of the largest hotel and conference centers in the region, offering more than 341,000 square feet of space including 6 major ballrooms, 76 meeting rooms and 128,600 square feet of exhibit and function space.

For smaller local events, as well as to stay in the heart of the Oak Lawn district, the Melrose Hotel is an excellent venue (www.MelroseHotel.com).

Major events held annually here in Dallas include the Dallas Purple Party, a major party on the gay circuit, held each year at the end of April. The Texas Circuit Boyz also hold a variety of events each year including Valley of the Dolls and Skeleton's Ball held in October. The annual Gay Pride festival is also one of the larger ones in the region, held annually in September. Out Takes, the local gay & lesbian film festival, started in 1999 and has grown to become one of the leading gay & lesbian film festivals in the US. The film festival is held annually in November.

Lastly, Dallas has its own John Thomas Gay & Lesbian Community Center, offering a local focal point for the variety of gay & lesbian organizations found throughout the greater Dallas area. Offering meeting rooms to accommodate up to 150, as well as a local hotline and switchboard and an archives and research library, the John Thomas Community Center serves a vital and important purpose for Dallas gay & lesbian community. It is aptly named in memory of the gay rights activist and leader of the Dallas community for many years. The memorial bell wall at the Cathedral of Hope also bears his name.

For the full-color PDF version of this story, go here:
http://www.PinkBananaMedia.com/pdf/gmg2008-dallas.pdf