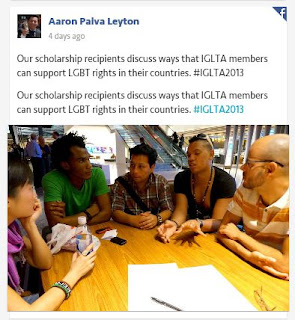 We wanted to take this time to summarize what turned out to be an incredibly successful program held during the most recent IGLTA Convention this past May 2-4, 2013 in Chicago.  Our company, Pink Banana Media, helped set up and promote the hashtag #IGLTA2013 for use in Twitter, Instagram, Vine and other social media outlets.  We then added an entirely new element to the mix, offering to donate to the IGLTA Foundation for every member who used the hashtag and "Tweeted" or uploaded a photo to Instagram using #IGLTA2013.  Our offer was as follows:

Pink Banana Media and Gay2Day.com are offering $1 to the IGLTA Foundation for every member who uses the hashtag #IGLTA2013 in their Tweet, Facebook status update, photo upload, Google Plus post, etc. during IGLTA's Annual Global Convention in Chicago, May 2-4, 2013. We're donating $1 per member per day, so if you post this daily during the conference, we'll donate $3.
Plus, for every IGLTA member who joins Gay2Day.com, we'll donate $10 to the IGLTA Foundation and for every IGLTA member who comes on board as a client with Gay2Day.com, we'll be donating $100.

We had no idea how successful this program would be!

We put the Twitter feed up on the presentation screens (using VisibleTweets.com), so that in between sessions and at some of the various trade shows and events during the convention, the various tweets using #IGLTA2013 would scroll past with up-to-the-minute, refreshed updates of what members were saying.  Many used is it to talk about some of the various workshops and education sessions, while others used it for their own company and product promotions, as well as to enhance their networking abilities while at attending the convention.

The #IGTLA2013 feed as seen on Twitter looked as follows: 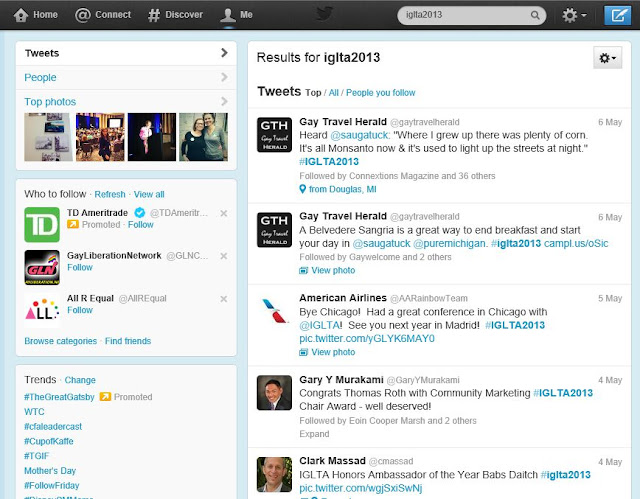 What was striking was the overall variety of what was Tweeted, as well as the extensive use of Instagram and photos, which tended to dominate what was seen when viewing the #IGLTA2013 feed on TagBoard.com, as seen below. 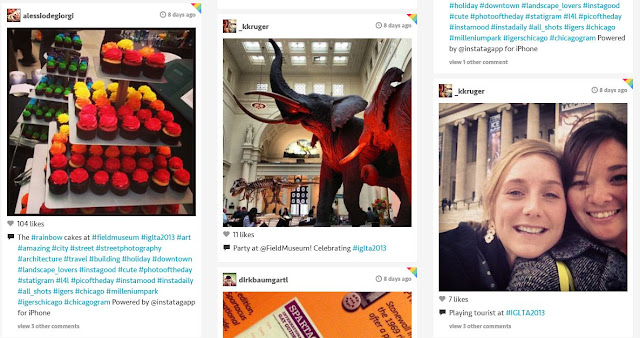 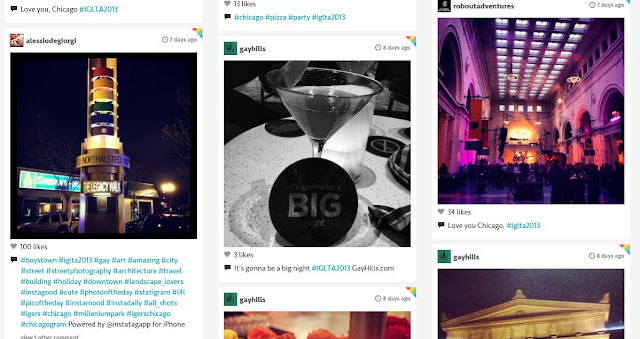 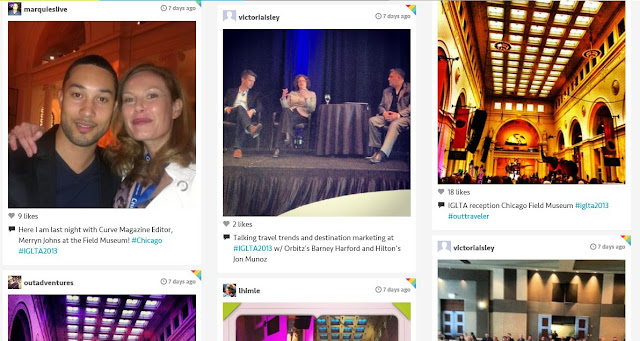 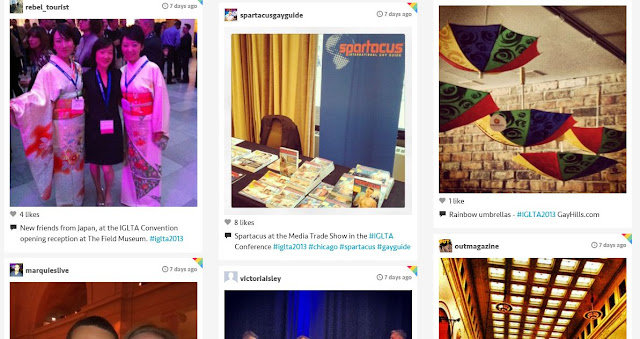 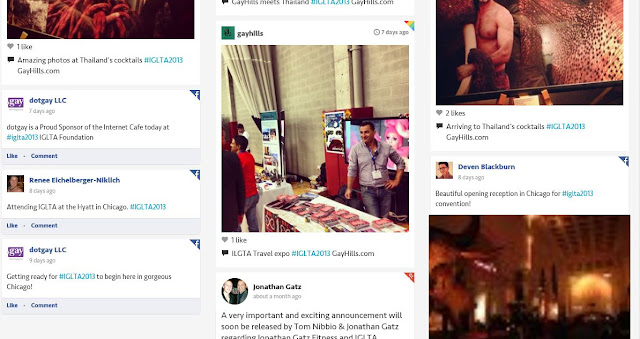 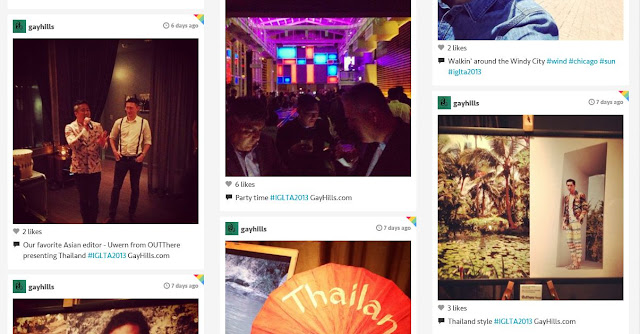 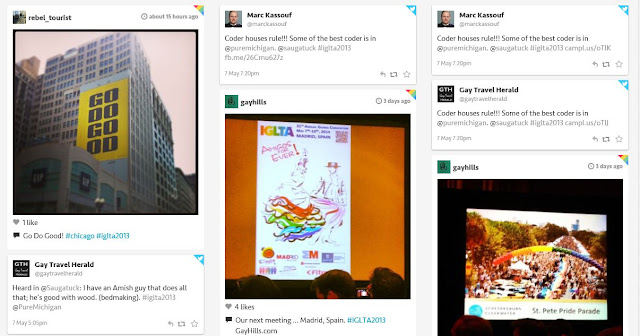 Above screen shots from http://www.tagboard.com/IGLTA2013

Twitter's new social 6-second video app Vine also did well, with various videos being posted and tagged from a few of the pre- and post-convention fam tours set up in Indianapolis, Saugatuck, Milwaukee and other local areas promoting LGBT travel in the vicinity of Chicago.

Lastly, there was some media articles written which were directly related to the Twitter, Instagram and #IGLTA2013 hashtag activity, as seen in this article on Skift.com:
http://skift.com/2013/05/02/hotels-and-cities-with-lgbt-friendly-reputation-poised-for-growth/

For Pink Banana Media and for IGLTA, we were incredibly happy with the results... it showed how with some simple planning and promotion of the #IGLTA2013 hashtag, IGLTA had a REACH of 5,660 individuals, with an overall exposure of 39,138 impressions, as measured by TweetReach.com and viewed below.  Our top Tweeter was Marc Kassouf of GayTravelHerald.com, with our overall top 5 Tweeters also including TruthDrivenLife, StoryTellerBill and StonewallMuseum. 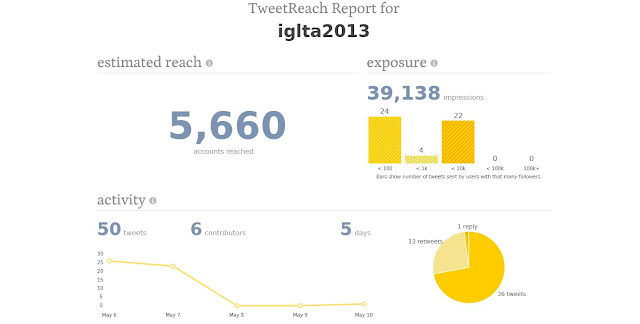 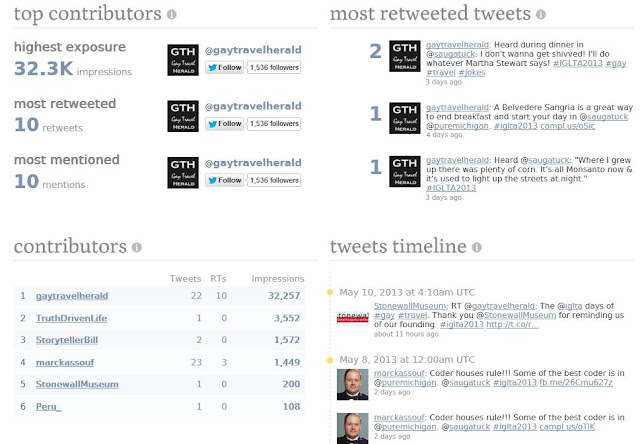 On Facebook, separate from the hashtag, the social media activity translated well to this platform as well, with a very visible surge in member postings, engagement and interactivity with the IGLTA Facebook page found at www.facebook.com/IGLTA 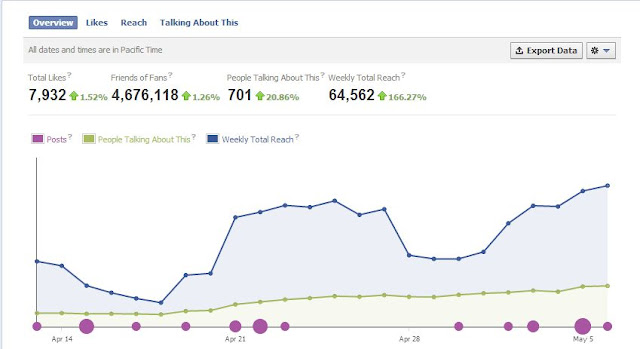 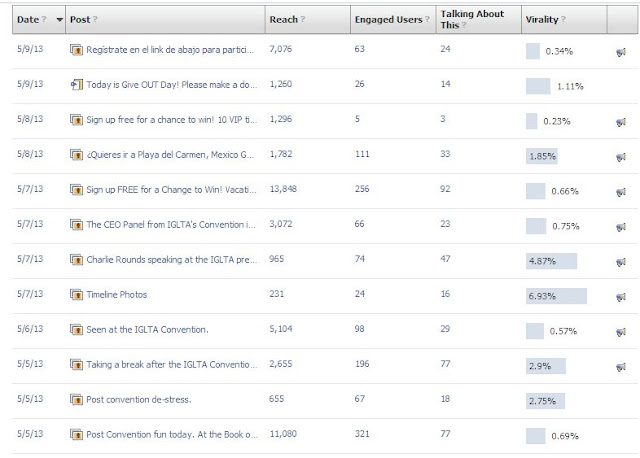 With our financial donation on top of that, we believe we've come up with a formula for success in partnering with other LGBT events in the future.

Jon Sigurdsson said…
Thanks for sharing these statistics!
The event looks pretty great

asad said…
Google started using site speed as a ranking signal in their algorithm way back in 2010, and it continues to serve as one of the many factors that determine where your website shows up in the search results. We help you WordPress Speed Optimization are Page Caching, PHP latest version, Image optimization and resizing, jquery update, Cache Preloading, Sitemap Preloading, GZIP Compression, Browser Caching, Database Optimization, Google Fonts Optimization, Lazyload, Minifying JS CSS HTML files, Deferring Unused JS/CSS, CDN setup, Mobile Detection, Stop unused CSS and JS file and many more optimization your WordPress website. So, your website super-fast loading within 1-5 seconds. WordPress Speed Optimization
September 20, 2020 at 1:16 AM