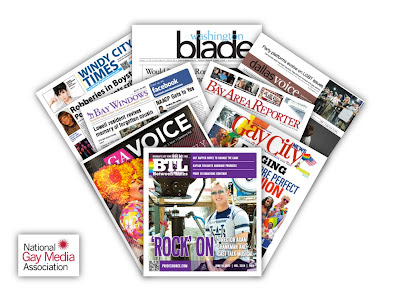 “The regional LGBT media continue to serve their communities with strong newspapers and online content,” said Tracy Baim, spokeswoman for NGMA and publisher of Windy City Times. “The LGBT movement is driven by a very local model. Many of our issues are different from city to city, and state to state, so our strongest media are the ones attuned to issues in their communities.”

The more than 150 regional LGBT media reach more than 3 million readers combined through weekly, biweekly and monthly newspapers and magazines. The annual Gay Press Report notes that the combined advertising spending in LGBT media was $307 million in 2011, with 95% of that spent in local markets.

NGMA is a new alliance of the “best of the best” in LGBT media, representing long-time brand names in regional media, including the Bay Area Reporter in San Francisco and the Washington Blade, both founded over 40 years ago, just at the start of the modern gay-rights movement. Other NGMA members are Bay Windows (Boston), Between the Lines (Detroit), the Dallas Voice, Gay City News (New York City), GA Voice (Atlanta), and Windy City Times (Chicago). These papers, along with their digital extensions represent an estimated 500,000 weekly newspaper readers.

Rivendell Media, the oldest and most experienced media rep. firm representing LGBT media to advertising and marketing companies, founded NGMA in 2011. “NGMA is the premiere vehicle for national advertisers to reach the gay and lesbian marketplace,” said Todd Evans, president of Rivendell, which also represents more than 100 other LGBT media.

“Gay media is local media,” said Evans. “It provides the best on-the-ground information to serve the diverse LGBT community. No one media outlet can be all things to the LGBT community, but regional media can do this best.”  The NGMA has its roots in the old National Gay Newspaper Guild, which provided the impetus for growth in the gay marketplace by providing the first verifiable readership demographics surveys of the gay press that sparked interest by Madison Avenue. Today the demographics of the LGBT consumer are well documented and this new organization will further the growth of LGBT media and provide the opportunities Madison Avenue demands today.