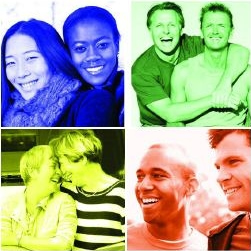 The report includes an appendix comparison to several “General Population” data points, derived from a parallel study of a demographically representative U.S. sample, as well as insightful commentary by community leaders on transgender, lesbian, Latino and African American respondents.
A pdf copy of CMI’s 5th Annual LGBT Community Survey report is available at no charge by using this link. (18mb)
Following are a few of the key findings from this year’s survey among United States gay men and lesbians.
Respondent highlights include:
LGBT Outreach & Communications
Smartphone Ownership
Technology & Social Interaction
Planned Purchases
Media Consumption
Interaction with Advertising
Diversity within LGBT
Differences by ethnic segments: A few highlights
A few LGBT vs. Mainstream Comparisons
Notes:
A pdf copy of CMI’s 5th Annual LGBT Community Survey report is available at no charge by using this link.
CMI’s other annual study, the 16th Annual LGBT Travel Survey, will be produced in October. Results will be presented at the International Conference on Gay & Lesbian Tourism, Palm Springs, November 2-4, 2011.
LGBT Research: There is a difference. Learn about CMI’s research methodologies.
To receive research announcements and updates, please be sure to sign up for our newsletter.
About Community Marketing, Inc. [www.communitymarketinginc.com]
Founded in 1992, CMI is the global leader in gay and lesbian market research, strategies and communications. CMI initiated the annual practice of collecting and analyzing data on gay and lesbian consumers in 1994 through online surveys, focus groups, field, telephone and customer satisfaction studies, as well as advisory boards. Business leaders from a variety of industries turn to CMI’s research to better understand LGBT consumers and business decision-makers.
CMI research is trusted by — and frequently quoted in — the New York Times, Chicago Tribune, Los Angeles Times, Miami Herald, USA Today, Wall Street Journal, Ad Week, Associated Press, UPI, CNN, CBS News and many others around the world.
Media interested in specific topics are welcome to contact CMI for further information.
Note to editors: Above is just a sample of the information available.  Press inquires should be directed to David Paisley, Senior Research Director, Community Marketing, Inc., 415/437-3800 ext. 102, or email david@communitymarketingnc.com.