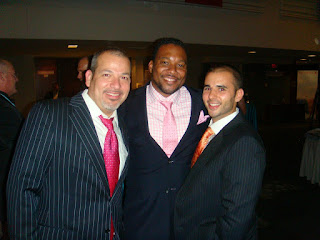 Ah, the convention is now in full swing... everyone has reconnected and yet the schmoozing and networking never seems to stop!  On Friday, everyone is hustling and bustling along, starting with the opening breakfast where David Whitaker of Tourism Toronto welcomes us all to Toronto.  The day is then a mix of various workshops and a great lunch sponsored by Air Canada.
The real highlight of Friday is yet to come... the consumer travel trade show held in the gay village at Maple Leaf Gardens.  Although the lighting was dim, the event was a complete success.  Various IGLTA members were able to exhibit their companies to both the other IGLTA members attending the convention as well as the hundreds of gay travel consumers to marched through the aisles.  Along with a Brazilian Samba performance that blew everyone away with some very HOT dancers and performers (OK, the drumming did last a bit long... my ears are still recovering), the night was a complete success.  This was the night most of the attendees headed straight over from the travel trade show into the gay village... and our own John Tanzella even blessed us all with a drag performance at Zelda's that was of course caught on cell phone video and broadcast for all to see the next morning.  You go, John! 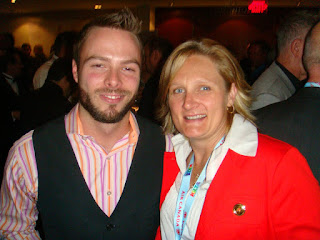 On a personal note, I had a great evening, albeit mellow (since we did have so much fun celebrating my birthday the night before).  I thought I'd get a nice quiet bite to eat at this really great Indian food restaurant located just outside the Conexity.com office, and as I'm relaxing and chatting with Richard, along comes Jeff Marsh from Orbitz.com and then Tom and Dave from Community Marketing.  It was one of the wonderful, unplanned evenings that I thoroughly enjoyed!
Saturday the Media Trade Show breakfast began... it's always cute to watch our IGLTA Convention attendees roll in for that Saturday morning breakfast one by one... you can always tell who went out, who stayed in and who went crazy by the way they stroll in.  The breakfast was a success, however, and it allowed the various media companies in attendance to mix nicely with the attendees and "talk shop" for just a little while.
Of course, as with all IGLTA Conventions, it was the anticipation of the upcoming Gala Dinner that had everyone buzzing.  And this evening was not one to disappoint.  I had the opportunity to sit at a table with my dear friend Kelsey Bray of Earhart Adventures, along with the Air Canada folks who had sponsored so many functions during this event.  The evening went without a hitch, with the ProudFM local personality Deb MCing the night.  The new board was introduced, with Mya Lake Reyes from Las Vegas CVA and Tanya Churchmuch of Tourism Montreal / GirlPorts.com becoming our newest board members, and Steve Smith from Key West winning a board of directors comeback!  For the IGLTA awards presented for best website and best brochure, our friends from OutAdventures.com took 2 out of the 3 awards presented that night, and Clovis Casemiro of Brazil was awarded the Ambassador of the Year award.  Especially thrilling was our past board Chairman, Andrew Stokes of Marketing Manchester receiving the Hall of Fame Award, and Juan Julia of Axel Hotels receiving the Chairman's Awards.
What was really fun was the dance set up just outside of the dinner, along with a full Belgian chocolate fountain with lots of goodies to try out, all sponsored by our friends from Antwerp, the location of the 2010 IGLTA Convention next year.
Link to all photos: http://www.flickr.com/photos/mattskal/sets/72157617758915032/

Anonymous said…
I remember you blog oftenly on because of the content makes very nice to read. Also I got some of the social networking website and online friends community website to get more friends for fun and entertainment to reach right destination about online friends.

Anonymous said…
Affiliate Marketing is a performance based sales technique used by companies to expand their reach into the internet at low costs. This commission based program allows affiliate marketers to place ads on their websites or other advertising efforts such as email distribution in exchange for payment of a small commission when a sale results.
www.onlineuniversalwork.com
January 7, 2010 at 9:53 PM